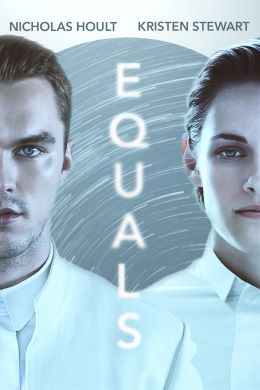 “Equals” is a romance, sci-fi, fantasy film directed by Drake Doremus and starring Nicholas Hoult as Silas and Kristin Stewart as Nia. In this Romeo & Juliet dystopian, society referred to as ‘the collective’ acts and functions under the guise of a Utopian society where crime and most diseases including the flu and cancer have been eradicated and individuals live modern, productive, clean, minimalist lives. The success of mankind was made possible by the continuous suppression of human emotion. However, the collective only tolerates individuals who function as productive members. What does it mean to be a productive member? It means the complete absence of emotions. Emotions lead to distractions, impulsivity, volatility, and ultimately chaos. Members of the collective are practically clones of each other, they all wear white clothes, live in clean-lined, cold, box apartments where their beds, closets, and kitchens retract into the walls after use. They go to work, come home, eat, sleep, wake-up, and repeat, and they’re all quite content doing so. Although most diseases have been eradicated, society is now plagued by the sufferable Switched On Syndrome (S.O.S.), a disease characterized by the acute onset of emotions and progression of symptoms in the later stages. In the latest stage of the disease there is nothing left for the individual except for a trip to the D.E.N. (Defective Emotional Neuropathy Facility). Two co-workers (one from the ‘Text’ department the other from ‘illustrations’) work together at Atmos, a highly reputable organization dedicated to the accurate depiction of our history. This story begins after his diagnosis of S.O.S. and when Silas begins to suspect Nia is also suffering from the disease. Silas and Nia need to avoid the D.E.N. long enough for the cure. With the medical field on the precipice of finding the cure, will the two make it in time? Will the cure solve all their problems or is there another path for them?